It is finally getting close to done. months of on and off knitting. Its starting to get cold here inTexas and boy do I hate the cold! I am making this coat out of 100% baby alpaca to keep me extra warm. 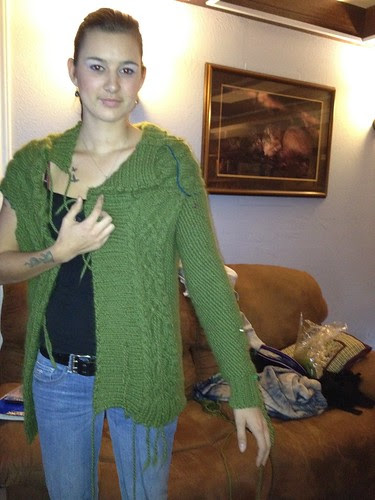 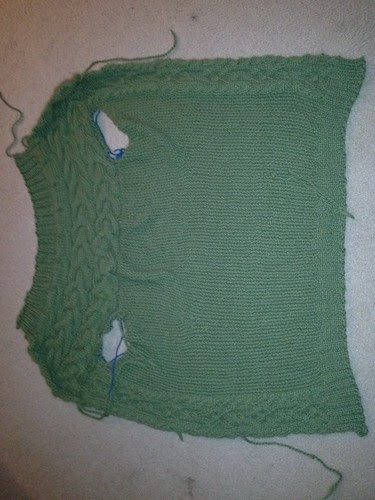 After having a few people message me asking for the pattern( that mysteriously disappeared!) I found a old ruff draft, knit up the hat, and revised.
Before it was in Emily knitting language, apparently not to understandable always by others 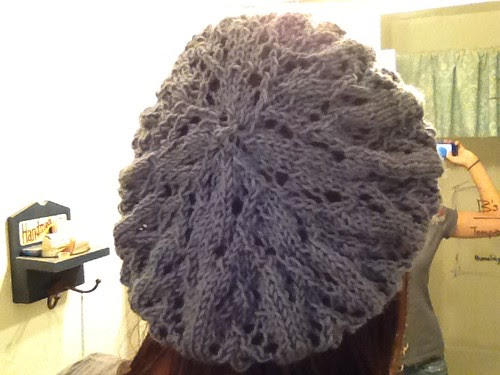 I finnaly found a job. It's pretty tuff around my town to find a job. Got a job at IHOP working 5 days a weeks 10pm - 6am. Hoping to make awsome tips!...cause that will mean awsome yarn!...after I get a place with my friend and need to find a car that secretly wants to kill me.
Finished my Central park hoodie. will post pic soon.
Posted by Em at 4:44 PM No comments:

Bday Socks for myself just in time!

I finished my actual PAIR of socks for myself just in time, tomorow is my 21st birthday. And the sock fit PERFECT. very happy with them. Made them with my very deep blue Cascades Heritage yarn =) 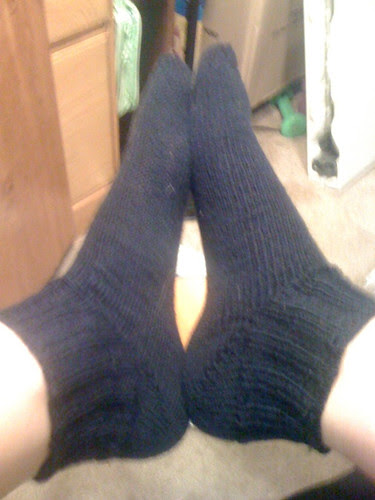 And my parents got me this bottle wine for my birthday.So me...heehee 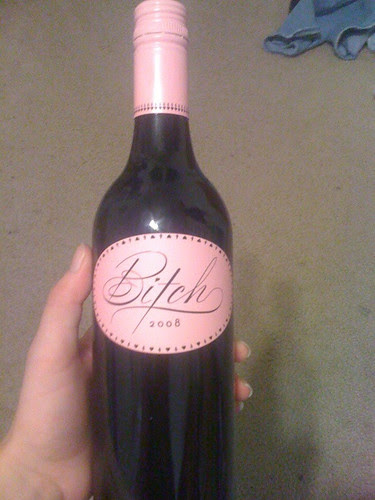 Kinda was bummed today. Been hoping to get a call from a job I thought I was going to get. Guess not...=(

Well Ive finished my Swallowtail shawl. But it needs to be dyed and then blocked to be completely done. 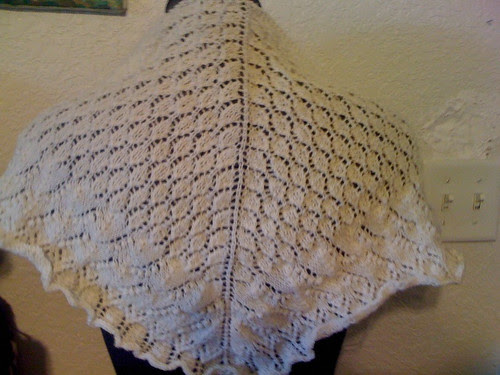 So freakin close to finishing the second sock of my very first ACTUAL matching FITTING socks...for me. On the cuff and what do I do...I start another project.hehe
Im designing a messenger bag. Its not going to be as big as one I will eventually want. We'll call this one a lil purse like prototype messenger bag. I want to put something on the front of the flap but haven't decided on what yet. Hmmmm....

This was such and awsome weekend. For an early Bday present my Mom and Dad took me to Austin (TX) and we all three took a spinning class at Hill Country Weavers. I learned so much and had so much fun learnign how to spin! And I did good =)

And look at all the fiber we got! Most was all from the class, except the bag of raw(i think washed though) Alpaca from Gauge. Most is wool, but the curly green is Mohair...Ive never had mohair before =) 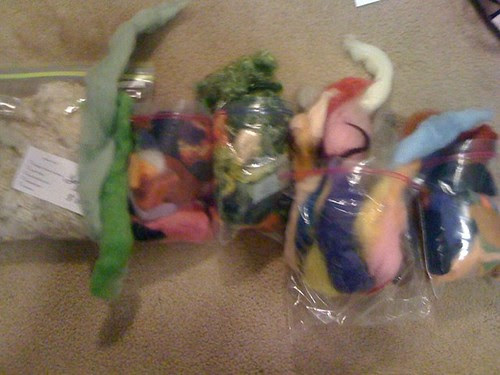 And this is what I spun! 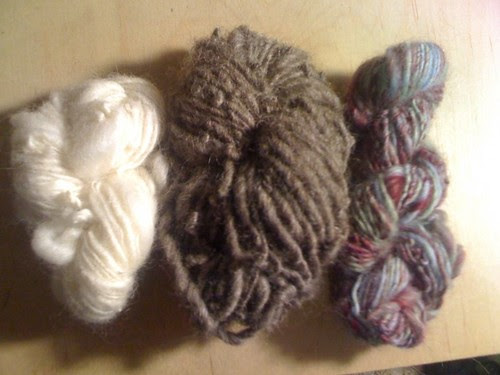 I am about at the 'rip my hair out' point. I just want to make ONE pair of freakin socks! I bought 2 skeins of Deborah Norville sock yarn to make a PAIR of sock just for me. I had did one sock with some yarn I had got in Ohio but did not have enought o make two, AND it was tooo long for my foot. So yesterday I start my toe-up, short row heel sock using Deborah Norville yarn..toe...knit...knit...knit...knit...heel..knit..knit...try on
It huuuuge! Right length this time but is liek 5 times to big around, very loose knitting. I know i knit loosly, but not THIS loose. WTF!! I continues to knit to make a swatch. I had begun the sock with size 3 and i swatch all the way down to 0. Still no big difference in looseness. I think this yarn is loose itself. The other sock from the yarn in ohio was perfectly knit, just wrong size
Sigh* So i have brought out my hank of Cascades Heritage sock yarn I got in Austin.
Dear Yarn/knitting Gods,
Please please please please let me get a decent gauge, Please let it not be to loose, and work for a sock. Please shine you love upon this adventure to make a pair of socks. I have been so good, and have had patience and perseverance, but its startign to wear thin. O please let this pair work!
Posted by Em at 3:43 PM 2 comments: